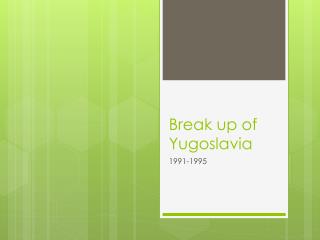 Break up of Yugoslavia Break up of Yugoslavia

Syllables and Syllabic Break-Up - . ‘cause breaking up is hard to do…. what is a syllable? how does one count

The BREAK-UP of YUGOSLAVIA - . josip broz tito “brotherhood and unity”. a popular refrain:. “yugoslavia has 7

The BREAK-UP of YUGOSLAVIA - . yugoslavia. from its creation in 1918 until the country broke apart in the early 1990s,

Yugoslavia : Origins of a Catastrophe - . cgw 4u0 mr. miller. thesis. the yugoslav catastrophe was not mainly the result

The Breakup of Yugoslavia - . world geography mrs. curtiss. austrian-hungarian empire prior to ww i. road to breakup.

Yugoslavia: The Break Up - . gunnar &amp; megan . what lies at the root of this conflict?. the five republics of

Nations and Nationalities in Socialist Federal Republic of Yugoslavia and after the Break - . selma muhič-dizdarevič,

Break up of Pangaea