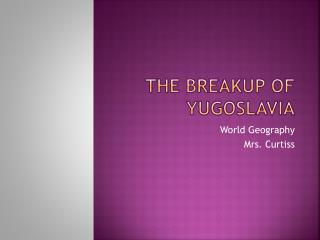 The Breakup of Yugoslavia The Breakup of Yugoslavia. World Geography Mrs. Curtiss. Austrian-Hungarian Empire Prior to WW I. Road to Breakup. After WW I, Austro-Hungarian Empire broken up Unified into a multi-ethnic state based on linguistic groups Ethnic diversity in Yugoslavia was enormous:

The Breakup of Yugoslavia

The BREAK-UP of YUGOSLAVIA - . josip broz tito “brotherhood and unity”. a popular refrain:. “yugoslavia has 7

Norton Nabs a Nu! - . an introduction to the physics of neutrinos. paul nienaber, fermilab (with apologies to dr.

Twentieth-Century Developments - . extremes in violence and progress 1 st half of century world wars i &amp; ii

I. State and Nation - . a. state: political unit (can be used interchangeably with country ) b. nation: refers to a

Language &amp; Identity in the Balkans - . chapter 2: serbo-croatian: united or not we fall. 2.0 introduction:the

Nations and Nationalities in Socialist Federal Republic of Yugoslavia and after the Break - . selma muhič-dizdarevič,

Foreign Policy After the Cold War (Carter, Reagan, Bush) including Desert Storm - . the end of the cold war, marked by

Fall of Communism and the Breakup of the Soviet Union - . what is