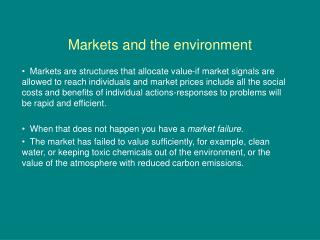 Markets and the environment Markets and the environment. Markets are structures that allocate value-if market signals are allowed to reach individuals and market prices include all the social costs and benefits of individual actions-responses to problems will be rapid and efficient.

Markets and the environment

THE GLOBAL MARKETING ENVIRONMENT - . sunarto prayitno. 1. introduction. the macro dimensions of the environment are

THE FIRM AND ITS ENVIRONMENT - . environment. the sum of all the elements and forces present in the firm’s immediate

Economic Globalization and the Environment - What do trade, investment, and finance have to do with nature?. economic

Economics of the Environment and Natural Resources - . tutor  roger perman (economics) overview this module does not

ECONOMICS AND THE ENVIRONMENT - . how much is clean air worth? can you charge somebody for damaging your air? how much

Your Health and the Environment: Resources from the National Library of Medicine - . stacey j. arnesen specialized