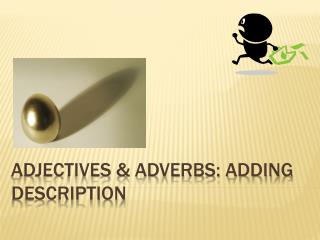 Adjectives & Adverbs: adding description. We use adjectives and adverbs to add specific details about people, objects, and actions. Without such words, our language and writing would increasingly straightforward and bland. Why?.

Lecture 11 Adjectives and Adjective Phrase - . objectives: 1. classification of adjectives 2. function of the adjectives

Parts of Speech - . with garfield and dr. phil. click to go to next slide. &quot; parts of speech &quot; are the