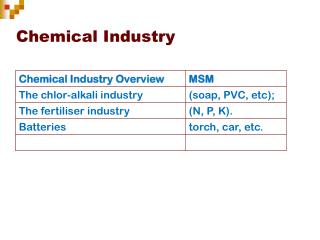 Chemical Industry. The chloroalkali industry . THE CHLOR-ALKALI INDUSTRY. Chlorine is manufactured by the electrolysis of brine. Sodium hydroxide is produced at the same time. Three different methods are currently in use.