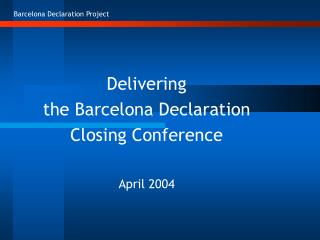 The Barcelona Declaration in Luxembourg 1997 - 2004 - . towards equal participation of people with disabilities at local

CONFERENCE DECLARATION - . we , the leaders of media trade unions from eastern and southern africa, - with the support

Mid-Term Conference in Barcelona April 22-23, 2010 - Preservation and conservation of the digital documentation in the