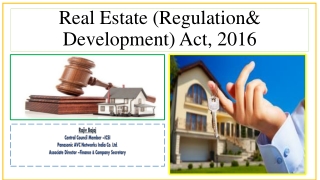 Real Estate (Regulation& Development) Act, 2016. Real Estate Act came into force in May -2016. WHY THIS Act IS REQUIRED..??. Real Estate and the housing sectors were highly unregulated sectors Lack of transparency in projects No proper information about the builder