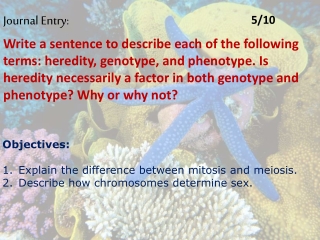 Journal Entry :. 5/10. Write a sentence to describe each of the following terms: heredity, genotype, and phenotype. Is heredity necessarily a factor in both genotype and phenotype? Why or why not?. Objectives: Explain the difference between mitosis and meiosis. My Trek to the Top of the World - . journals. journal entry #1. begin your journal by describing yourself and why you

WarmUp : Journal Entry - . in your journals, make a list of characteristics of urban or city life. next, suggest some of

WarmUp : Journal Entry - . respond to the following scenario in your journals. please be detailed in your response. you

A journal entry: To my mother - . july 4, 1863 confederate army maddison mitchell. my dear

Journal Entry - . answer the questions below based on your thoughts about cognitive development (yesterday’s notes): if

Fourth Week Journal Entry - . flag areas in your book that are fun, interesting, or shocking.  find a quote and write it

Research journal entry - . this means a complete citation, as would appear in your works cited. all sources must be

Using those answers…we’re going to write a journal entry - . your role is one of the ones you just wrote down (bus

Journal Entry #2: Meditation 09/16 - . choose one or more of the following questions and complete a half-page journal

Journal entry #1 - . do you think people eventually become like their parent/parents? where have you seen examples of

Journal Entry - . please complete a journal from your journal options from unit 3 . chapter 5. eq’s: what effects our

“Children of the Sea” Journal Entry - . what kind of picture is painted of haiti in the first story? what is life

Journal/Entry Slip: 11-136 - . answer all of the following questions: 1. what would you do if you were montag and found