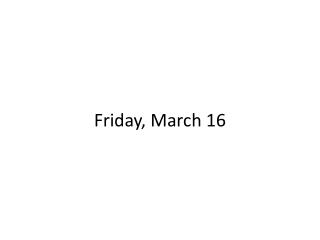 Friday, March 16. Michael Ondaatje’s In the Skin of a Lion. Key Materials. Interview for CBC Canada Reads Critical overview Project Bookmark Canada City of Toronto Archives Excellent discussion of Skin (you’ll have to log into your library account to access this resource). Character. Friday, March 21st - . get your book and homework out. pick up your things from the cabinet.

March 6, 2009 (Friday) - . the relationship between the indian ocean dipole mode and the interannual variation of

Friday March 1, 2013 - . warm up: if there are 14 chromosomes in pea plant cells, how many chromosomes are present in a

Friday, March 1, 2013 - . dlt: . bell ringer. chapter one true or false moche the beadle was the rabbi at the synagogue

Friday, March 8, 2013 - . daily learning target: i can read increasingly challenging texts. i can analyze the influences