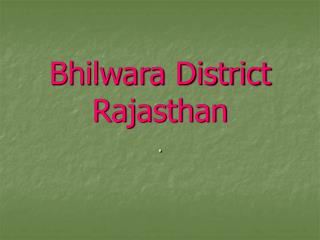 Bhilwara District Rajasthan. . BHILWARA. Bhilwara is a city in Mewar Region of Rajasthan, 600 km from New Delhi. Tradition has it that it came to be known as Bhilwara because it was mostly inhabited by Bhils in old days. Best Fertility Hospital in Ajmer, Udaipur and Bhilwara Rajasthan - Narayani ivf center is regarded as one of the best

Rajasthan State open school in Udaipur, Bhilwara, Chittorgarh-The Success Point - The success point because we are in the

Bhilwara Energy Ltd - . corporate presentation. cautionary statement and disclaimer. this document is not and should not

Best UPSC Coaching in Bhilwara - Once you work hard with time then you lost your valuable time but instead of this, you