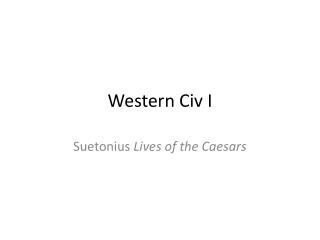 The Rise of Nations The Late Middle Ages - Chapter 14 formation of western europe this powerpoint is in teacher-public,

LIBS 7005: Technology, Invention &amp; Power - . dr. stephen a. ogden. the origins of technology” an archaeology of

A History of Western Civilization ( Part I) - . from the beginnings until the middle ages. what is “western

The Persian Wars - . west. civ. mr. lawrence. the persian empire. the largest empire in the know world one of the most

The Successors of Alexander the Great - . western civ. the death of alexander. 323 bce: alexander the great dies in

Western Classical Tradition - . the sonata. what is meant by ‘sonata’?. the word sonata means ‘sounded’ or

IV. Farming in the West - . a. homesteading. the homestead act (1862) offered 160 acres to anyone who resided on the land

The Power of the Church in Medieval Europe - . mr. lawrence western civ. the authority of the church. two types of power:

Absolutism Introduction - . western civ. fall 2008. what is absolutism?. it’s all in the name european governmental