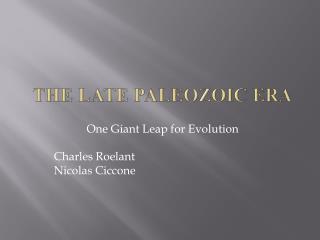 The LATE Paleozoic Era. One Giant Leap for Evolution Charles Roelant Nicolas Ciccone. The Devonian Period. Known as the “Age of the Fishes” The Late Paleozoic World - Guiding questions. how did marine life of late paleozoic time differ from that of middle

PALEOZOIC ERA - . known as the age of fish or trilobites. life starts in the seas and moves onto land. paleozoic

The Early Paleozoic Era - . geology 103. precambrian washington…doesn ’ t exist. in fact, you ’ d have to go to the

The Geology of the Paleozoic Era - The paleozoic era. . geologic periods in paleozoic record 7% of earth's history