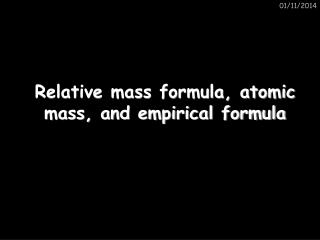 Review-Molecular Formula - . nicotine, a component of tobacco, has an empirical formula of c 5 h 7 n. the molar mass of

Formulas, Equations, and Moles - . atomic and molecular mass. the atomic masses as tabulated in the periodic table are

Percent Composition, Empirical and Molecular Formulas - Mass percent. percent of each element a compound is composed

Determining the Empirical Formula of Copper Chloride - . purpose of the experiment determine the empirical formula of a

Formulas, Equations, and Moles - . chapter 3. molar mass. the sum of the atomic masses for all the atoms represented in

Formula Weight - . formula weight is the total mass of a compound. fw = sum(atomic mass x # of the element). calculating

Empirical Formula - . the simplest ratio of atoms for example, the empirical formula of h 2 o 2 (hydrogen peroxide) is ho

Determining the Empirical Formula of Copper Chloride - . purpose of the experiment determine the empirical formula of a

Formula Mass &amp; % Comp - . it is not. a lack of intelligence. it is. a lack of preparation. formula mass &amp;

STOICHIOMETRY - . the mole through p ercent yield. atomic mass, formula mass, and molecular mass. these are all basically