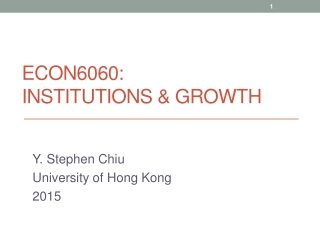 ECON6060: Institutions & growth. Y. Stephen Chiu University of Hong Kong 2015. Alibaba IPO. Two years ago, the Alibaba Group asked to have its IPO in HK under a partnership structure a majority of board members will be proposed by the founders / management term/etc.