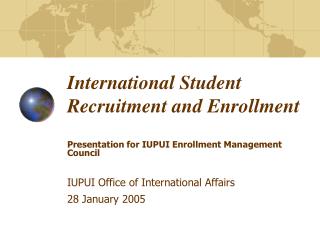 How to Get Permanent Residency for International Students in Australia? - Permanent residency (pr) in australia is Office of International Affairs - . recruitment: a trip to the university of botswana in march 2013 produced: 24

Cloudy with a Chance of Enrollment: The effects of weather on student enrollment behavior - Kate ralston darin wohlgemuth

Cash Cows and Enough “Con” to Go Around: Academic Dishonesty among International Students and Institutions of

Admissions - . enrollment management 102 first level training an introduction to the most frequently asked questions and