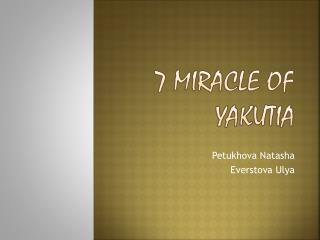 7 Miracle of Yakutia. Petukhova Natasha Everstova Ulya. Lena Pillars. Lena pillars is a national park in Russia, on the banks of the Lena River. Located in Khangalassky ulus Yakutia , 104 km from the city Pokrovsk .

EALAW Conference 29 th March 2011 Newport Minority Ethnic Achievement: Myth or Miracle? - What do the statistics for

from Jonathan Bernis, - I am very pleased with the outcome of the miracle of israel airings in kc so far. we were #1 in

Survey of East Asian Economies - . the east asian miracle. east asia (1997). what went on in east asia: from miracle to

agnosticism - . not being sure whether god exists. atheism . believing that god does not exist. conversion . when your

Chapter 15 Revision of the Equity Portfolio - . an individual can make a difference; a team can make a miracle - 1980

Seerah of The Prophet - . “the miracle of isra’ and mi’raaj ” the night journey to jerusalem and ascension to

“I believe that reading, in its original essence, (is) that fruitful miracle of communication in the midst of - “i

______ - . sofroneyeva asya. yakutsk. yakutsk is the capital city of the sakha republic, russia, located about 450