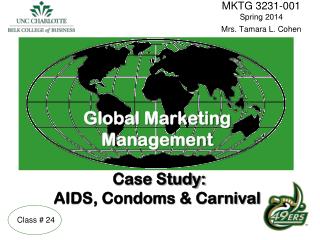 CONDOMS - . a series of presentations developed by tgpsh/gtz and psi-tanzania. condom use around the world. a

Case Study – Global Warming - . what is global warming?. rise in temperature of the atmosphere and oceans earth's

Lecture 21 Case study: influenza virus and Case study: HIV/AIDS - . today:. learning from the past to predict the future