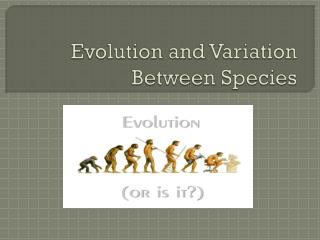 Evolution and Variation Between Species Evolution and Variation Between Species. Natural Selection and Evolution. The observation of variations within species that were made in the 19 th century led to the proposal of “Natural Selection” by Charles Darwin and Alfred Wallace. This theory explained how evolution could occur.

Evolution and Variation Between Species

Selective Breeding - . warm up. each of these dogs is a member of the same species. why is there so much variation within