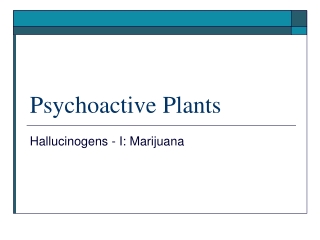 Plants - . outline. what are plants what a plant needs seeds roots stems leaves flowers diagram of a flower. what are

The Use and Abuse of Psychoactive Drugs - . chapter 9. addictive behavior. habits that have gotten out of control, with a

Plants - . autotrophs. plants all share some characteristics:. all are photosynthetic. all are multicellular. all are

Why do you think that plants such as these are essential for most life on Earth? - In what major way does the top pair

Enviroment - . environment. we should clean our house growing the plants we should not through out the carbidge. make our