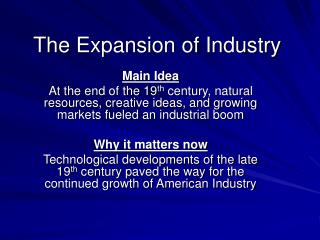 The Expansion of Industry The Expansion of Industry. Main Idea At the end of the 19 th century, natural resources, creative ideas, and growing markets fueled an industrial boom Why it matters now Technological developments of the late 19 th century paved the way for the continued growth of American Industry.

The Expansion of Industry