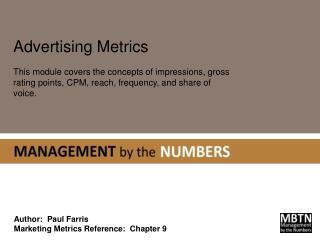 Chapter 4: Marketing on the Web - . electronic commerce, sixth edition. objectives. in this chapter, you will learn

Marketing Your Chapter - . “strive for excellence, not perfection.” h. jackson brown, jr. question. what is your main

Effectiveness Metrics for the Web - . prepared for the university of washington may 17 th , 2001. what will we be

Content Marketing: How To Sell It In - Content marketing is all about the battle for customer attention. as most