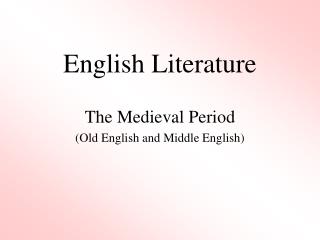 English Literature. The Medieval Period (Old English and Middle English). England before the English. When the Roman legions arrived, they found the land inhabited by “Britons.” Today, the Britons are known as the Celts Stonehenge no written language English Language Learning Through Caribbean Literature? - . why is it a d oubly c hallenging proposal?. the breaking of a

English 121 Final Project Literature in my Life - . krista mader. where can literature be found?. literature is all

ENGLISH LITERATURE - . the dawn of english literature. the ancient britons and their language. we find celtic in

Welcome! - . hello and welcome to english composition 102, introduction to literature. i am looking forward to exploring,