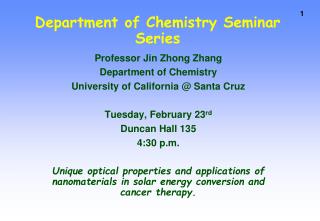 LIVE INTERACTIVE LEARNING @ YOUR DESKTOP - . nasa/nsta web seminar series how telescopes have changed our view of the

Organic Chemistry - . c hemistry. chemistry is the study of the substances, specially their structure, properties,

Chemistry and Biochemistry - . med 164. william budd medical careers institute. objectives. what is an atom? what are

Welcome to the World of Chemistry - . the language of chemistry. chemical element - pure substances that cannot be

Department of Chemistry Seminar Announcement - . about the