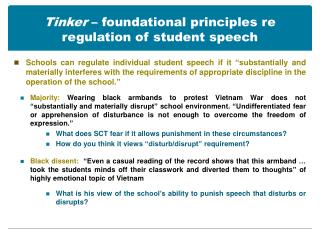 Tinker – foundational principles re regulation of student speech. Schools can regulate individual student speech if it “substantially and materially interferes with the requirements of appropriate discipline in the operation of the school.”

Al A The tinker case was a very neat case because b the ob the ob the of the of D d - Tinker v. des moines. matt miller,

Teacher Regulation in British Columbia - . bccpac agm may 5, 2013. teachers act. the teachers act is based on two

From Pilgrim at Tinker Creek - . he heaved himself down the asphalt driveway by infinite degrees, unwavering. his

Speech Guidelines - . environmental issues. what not to do…. what could this student have done to improve the delivery