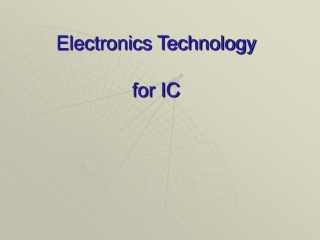 Electronics Engineering Technology - . computers and networks specialization. some of our graduates and their third year

Industrial Technology ELECTRONICS - . so, what is the electronics course?. industry study design and management

Power Electronics Technology - Problem based and project-oriented learning. an other way of implementing research based

Nano-Electronics and Nano-technology - . a course presented by s. mohajerzadeh, department of electrical and computer