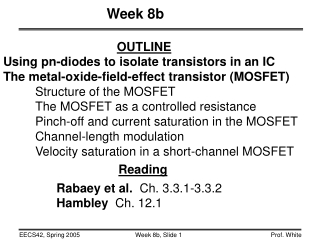 Week 8b. OUTLINE Using pn-diodes to isolate transistors in an IC The metal-oxide-field-effect transistor (MOSFET) Structure of the MOSFET The MOSFET as a controlled resistance Pinch-off and current saturation in the MOSFET Channel-length modulation

Chapter 8B - . biological evolution. jean lamarck. theory of need theory of use and disuse theory of inheritance of

Week 8b Chapter 34 35 Fundamentals of Radiobiology

Vocabulary #8B - . night and prejudice words. abstraction . (noun) a generality ; an idea or thought separated from

Appendix 8b - . daily maps of fine particulate sulfur concentrations. for improve sampling days, there are two maps per

powerpoint 8b - . t he definition of art what is art?. existing with art. the power of meaning some of our simplest words

Lecture 8b - . spectroscopy of amides. infrared spectroscopy. the location of the carbonyl stretching frequency varies

Unit 8B - . titrations and buffers. strong acid/base titrations. video 8.6. objectives. you should already be able

Lecture 8b IPv6 - . objectives: explain the need for ipv6 addressing. describe the representation of an ipv6 address.