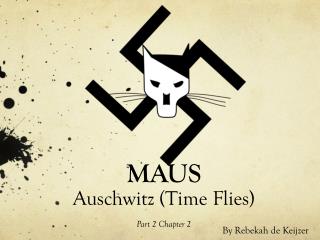 MAUS Auschwitz (Time Flies) Part 2 Chapter 2 . By Rebekah de Keijzer. Chapter Overview. The success of MAUS and the effect on Spiegelman Vladek and Anja reunite in Auschwitz Vladek’s jobs in the working camp The horrors of the Auschwitz. Auschwitz - . from spring of 1942 until the fall of 1944 transport trains delivered jews to the camps gas chambers from

Maus - . by art spiegelman. beginnings. following wwi , germany was left in insurmountable debt, for which there was no

auschwitz - . operation reinhard. code name for plan to kill jews in poland. the first auschwitz. auschwitz is the german

Auschwitz - &quot;when i came to power, i did not want the concentration camps to become old age pensioners homes,

AUSCHWITZ - . poland. the next photo is of the gateway into the auschwitz i concentration camp complex in the town of