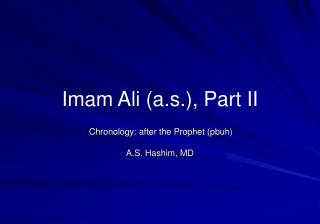 Imam Ali (a.s.), Part II. Chronology: after the Prophet (pbuh) A.S. Hashim, MD. After The Prophet: The Aftermath. Without a job, Ali finds a job at an orchard belonging to a Jewish person Fatima is sick Ali Tutors his children, along with Ibn Abbas

Lecture 4 - . chemical reaction engineering (cre) is the field that studies the rates and mechanisms of chemical

The uncles of the Báb - . questions for your cousin. when did this happen? do you have any writings? what makes you

Al-Jawaad Anecdotes and Sayings - . by a.s. hashim. md sayings of imams taken from: