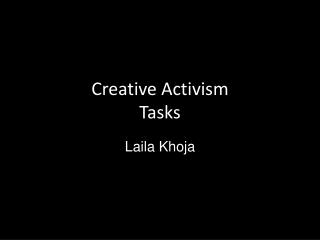 Creative Activism Tasks. Laila Khoja. Introduction. In This Course we had to make 7 tasks to pass the module. So I will talk about these tasks and describe what I have done while making them. Task :1.

Creativity - . crs/edl 560 foundations of creative learning and thinking. will this be on the test?. brainstorm – a

Accounting &amp; Financial Advisory What is it we do? - . scoping. project plan. reporting. implemen-tation. audit

Creative Activism - . by sebastian shaw. flash mob. one of our tasks was to create a flash mob, within a certain amount

What Is a Zine ? - . rhymes with “bean” challenging, individual, exciting limitless, ephemeral, ever-changing