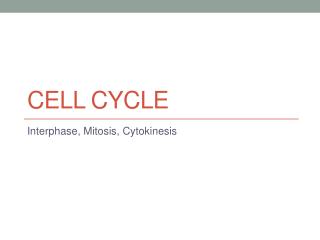 Cell cycle - . metaphase. http:// www.wi.mit.edu/news/paradigm/spring_2008/splitsville2.html this is the phase when the

Cell Cycle - . the repeating set of events in the life of a cell. includes interphase 3 phases cell division mitosis

Cell Cycle - . 6.4 – 6.9. the cell cycle. alternation of activities between cell division and other processes

CELL CYCLE - . over time, many cells die and need to be replaced . mitosis - the process by which a cell reproduces to

Cell Cycle - . mrs. hertel. define the cell cycle and state the order of its steps. define and identify the different

Cell Cycle - . nbo 3. cell cycle. def: the life cycle of a cell differs greatly on type and function of a cell. neurons

CELL CYCLE - . over time, many of the cells die and need to be replaced. the process by which a cell reproduces to create