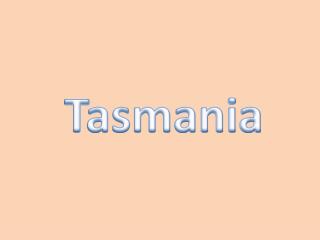 The Tasmanian Devil - . where does the tasmanian devil live?. they are found in the wild only in australia in the state

Tasmania the Healthiest State by 2025 - . tasmania the healthiest population in australia by 2025 liberal party

Australia - . australia - officially the commonwealth of australia - country in the southern hemisphere, occupying

The Tasmanian Devil - They like dry sclerophyll forests and coastal woodlands. the tasmanian devil. (sarcophilus

TASMANIA - . tasmania. tasmania is an australian island and state the state includes the island of tasmania – the 26th