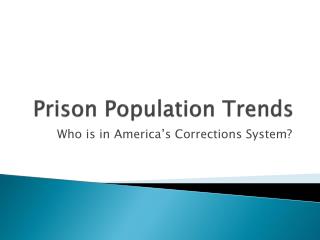 Agnes Goes to Prison: Sexual Assault and the “Olympics - Of gender authenticity” among transgender inmates in

The school to prison pipeline - . an overview of the issues and potential solutions for reform. presented by: kaitlin

Chapter 2 - . population. population: a critical issue. a study of population is important in understanding a number of

The ECB and the IMF are Not Ireland’s Friends: The New Debtors’ Prison - . sponsored by tasc &amp; smart taxes