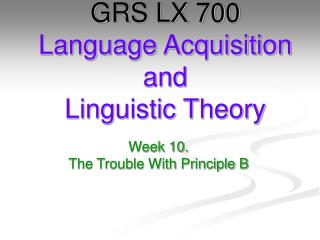 GRS LX 700 Language Acquisition and Linguistic Theory. Week 10. The Trouble With Principle B. Binding Theory. Binding Theory Constraints on assignment of reference. Reflexives ( himself , herself , themselves , …) Pronouns ( he , she , they , him , her , …) Names (inherent reference).

Carl de Marcken’s dissertation 1996 - . the unsupervised acquisition of a lexicon from continuous speech. “the