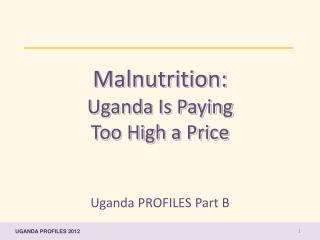 Malnutrition: Uganda Is Paying Too High a Price

Malnutrition: Uganda Is Paying Too High a Price

the Republic of Uganda - . flag. coat of arms. location of uganda within the african union. map of uganda. yoweri

DEVELOPMENT - . what is development. the term development refers to an act of getting better by expanding, enlarging or

The Development Gap - . what do you need to know?. what are the traditional ways of dividing up the world?. first,

NB – South Africa is not included in this unit - Study theme 3e: the politics of development in africa. nb – south

UGANDA (LRA) - . currently in uganda the war is still going on. a leader named kony has taken over the whole country and

Coffee From Cradle to Grave - By monica martinez and crystal mount race, poverty and the environment professor raquel r.

bulk sms services provider - . find a low price & we will match it.send a generic message to all recipients or custom