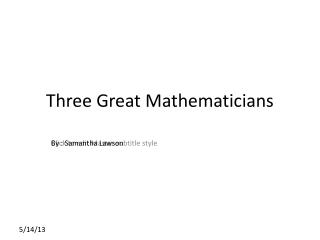 Creating a community of learners to increase student success - . george woodbury – college of the sequoias email

Engaging Young Mathematicians - . an nsf workshop on majors and the transition to graduate work. increasing the number of

Dice Games: Probability and Pascal by Lauren McCluskey - . this power point was made with help from: bayesian learning

Famous Mathematicians - . this half-term the numeracy activities will test what you know about some famous