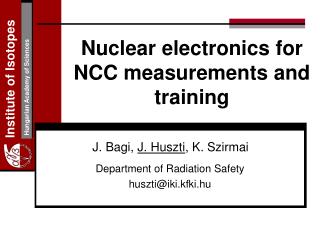 Searching for the NCC - . we can measure all sorts of neural correlates of these processes…so we can see the neural

Nuclear Spectroscopy of 229 Th: New Measurements and Applications - . determining the ground-state doublet in the nucleus

NCC 2010 - . st louis missouri. your gateway to an i.t. future. akc museum of the dog. the american kennel club museum of