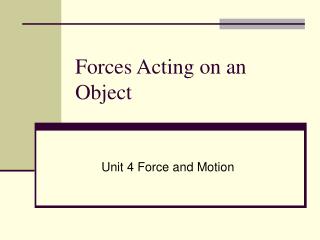 Forces Acting on an Object

Forces Acting on an Object

Net force - . sph3u – unit #2 dynamics. learning goals. after this topic, i will be able to… determine the effect of Forces &amp; Motion - . motion. a change in the position of an object caused by force (a push or pull). force.

Forces - . objective:. tsw – identify and describe the changes in position, direction, and speed of an object when

Forces and Motion - . reference: prentice hall physical science: concepts in action chapter 12. what is force?. a push or

What are Forces? - . a force is a push or a pull on an object. unbalanced forces. in any situation , the overall force of

What are forces? - . push and pull. types of forces. all forces involve interactions between objects. there are several

Forces - . an object’s motion is the combined affect of all forces acting on an object. forces. force is any push or

Force - . a force is a push or a pull. the combination of all the forces acting on an object is the net force . . push.

Forces &amp; Motion - . big ideas. every force is part of an interaction between two objects forces are pushes and

Forces and Motion - . balanced and unbalanced forces. net force= the overall force acting on an object when all of the

Balanced and Unbalanced Forces - . unbalanced forces. when two or more forces are acting on an object and they are not

OVERALL STABILITY - 4.1 external forces acting on a vessel. overall stability. in chapter 4 we will study five areas: the