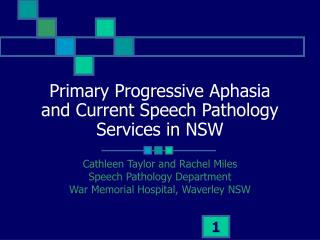 Speech Pathology - . ` by: tyrina r. dickson. significant points . about half worked in educational services; most

Speech Language Pathology - . what is speech language pathology?. help to make a treatment plan for patients to help them

Speech-Language Pathology - . courtney jones ms ccc-slp. speech-language pathology. what do we do? promote recovery of

What is speech pathology? - . communication disorders in australia. 12% of children in australian primary schools have a