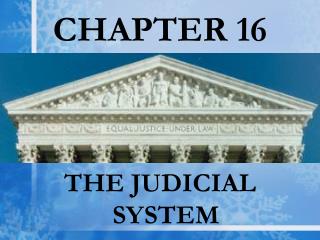 CHAPTER 16. THE JUDICIAL SYSTEM. Roots of the Federal Judiciary. Hamilton called it “the least dangerous branch.” Little on the judiciary in the constitution. Creates high Court, Congress establishes others. Judges have life tenure with good behavior.