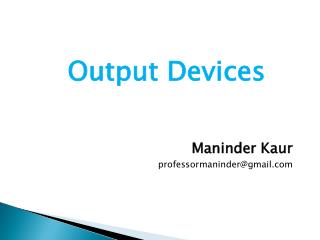 COMPUTER HARDWARE - 2. chapter. computer hardware. objectives of this chapter:. you can…. define input and output. list

CHAPTER 3 INPUT/OUTPUT - . in this chapter, you will: learn what a stream is and examine input and output streams explore

LEARNING OBJECTIVES - . to learn the common secondary storage devices and their basic characteristics. to learn the