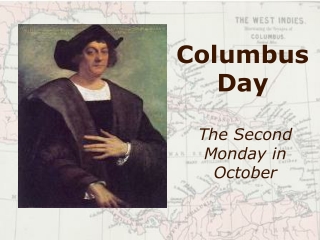 Columbus Day. The Second Monday in October. Christopher Columbus was born in Genoa, Italy in 1451. He began to sail when he was 14. He wanted to be an explorer. Many people at that time thought the world was flat. He disagreed. He believed he could sail around it because it was round. Columbus Day - . remembering the man who changed the world. columbus day. columbus believed that the earth was round.

Columbus Day? - . do now: what kind of information can you use as historical evidence when you are writing an argument?.

Why do we Celebrate Columbus Day ? - . columbus day is celebrated in the united states to honor christopher columbus's

Why Do We Celebrate Columbus Day? - This video talks about the colombus day which is one of the most widely celebrated

2010 Fall Italian/Columbus Day Retailer Opportunity - . concepts and designs in this proposal are the property of

Columbus - Christopher columbus was a famous explorer. his father was a wool weaver and he also owned a cheese stand.

columbus - . by r agen and b lake. beginning. christopher columbus was born in italy in 1451. he was the son of a weaver