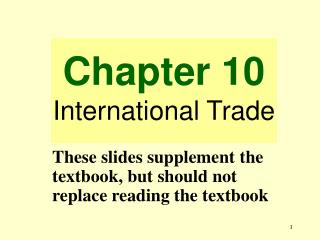 Chapter 10 International Trade. These slides supplement the textbook, but should not replace reading the textbook. Why trade with other nations?. All nations can increase productivity, lower prices, increase jobs and standard of living. Why is trade advantageous for all countries?.

c hapter 10 - . international cooperation among nations. chapter objectives. explain the importance of the gatt and the

Ch. 17 International Trade and Comparative Advantage: Understanding Trade Flows - . all economies, regardless of their

Ch 10 – Protectionism vs. Free Trade - . “free trade, one of the greatest blessings which a government can confer on