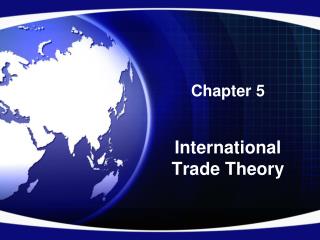 Theories of International Trade - . introduction. in the 1600 and 1700 centuries, mercantilism stressed that countries

Factor Endowments &amp; the Heckscher-Ohlin Theory Chapter 5 - . 1 introduction. we will study assumptions of the h-o

International Trade Theory and the World Trading System - . evolution of the theory of international trade theorists:

Chapter 5 - . the theory of trade and investment. learning objectives. to understand the traditional arguments of how and

Chapter 2 INTERNATIONAL TRADE THEORY - Learning objectives. 1. understand why nations trade with each other.2. be aware