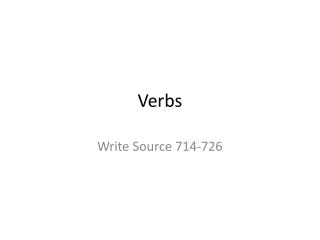 Verbs. Write Source 714-726. Verbs. Verb : a word that expresses action or state of being 714.1 Linking Verbs Links the subject to a noun or an adjective in the predicate. (Ex. He was the best fielder around.). Common Linking Verbs is are was were be been am Verbs - . s1 literacy. learning intentions. i can identify verbs in a sentence. i can use verbs to make my writing more

VERBS! - . everything you need to know . what makes up a complete sentence?. a subject – like man, you, we, she, they,