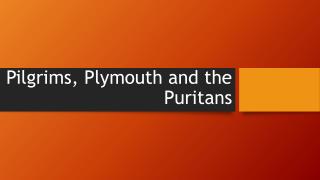 Pilgrims, Plymouth and the Puritans Pilgrims, Plymouth and the Puritans

Chapter 2 quiz 1 review - . settlers came to america for all of the following reasons except religious freedom riches

Livin ’ Life in Roanoke, Jamestown, and Plymouth - . roanoke- quick facts. it was the first colony in the new world,

Unit 1 Throwback Thursday - . colonization through constitution . which statement best explains the growth of

Puritans and Pilgrims - . new england colonies established. who are puritans?. puritans opposed many of the rituals and

Orientation - . plymouth and south shore association of realtors® 2013 . welcome new members!. the goals of this

APUSH REVIEW - . apush. which of the following statements about  the settlers that arrived at plymouth in 1620 is not