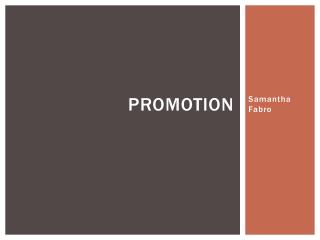 Promotion. Samantha Fabro. DO?. WHAT DOES PROMOTION. Communicates. Influences. PERSUADES. Promotion is aimed at the consumer. t ells them about a product. s o that they can buy it!. OF. ADVANTAGES. ADVERTISING:. - A repeated message communicates the purpose of a product or company.

Promotion of Physical Activity - . short quiz. to gain benefits of exercise, you must exercise everyday. exercise can

Program Promotion and Advocacy: Skills and Strategies for Physical Educators - . terri drain aahperd 2013. thanks to….

MODELS OF HEALTH PROMOTION - . objectives: you students will. understand the parameters required for health promotion