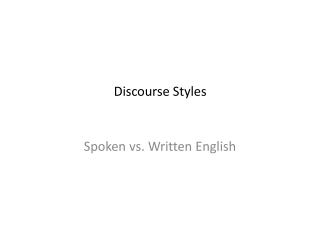 Discourse Styles. Spoken vs. Written English. Types of Discourse. There are many ways to classify discourse: Classification of discourse according to medium, mode or channel ( Dell Hymes) Written vs. spoken discourse. Discourse - . the three key concepts of language and discourse. discourses socially constructed knowledges about some

Discourse - She hid bob then cooked it, whose sister rose prices. they liked itself well, however sheila wanted. kangaroo

Styles Influencing Styles - . style influencing styles. music has a good deal of influence on itself sometimes from