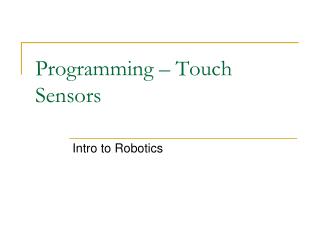 Programming – Touch Sensors. Intro to Robotics. The Limit Switch. When designing robotic arms there is always the chance the arm will move too far up or too far down. These problems can be stopped if there was something to PREVENT the arm from moving. Operator Assist – Touch Sensor. The C Programming Language - . currently one of the most commonly-used programming languages “high-level assembly”

Making Sense Out of Sensors - . jim halderman dayton, ohio. we started communicating by writing on the cave walls. as the