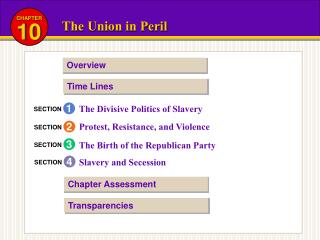 Chapter 14 The Union in Peril - . the american people , 6 th ed. slavery in the territories. the wilmot proviso.

Bell Ringer - . how can differences among students affect the climate of a school? . the union in peril. slavery becomes

A Definition of Risk - The degree of risk. 1.what is more risk or less risk?2.varies with the probability of

THE UNION IN PERIL - . before, during and after the civil war 1850-1877. the south before the war. rural plantation

A Union in Peril: The Sectional Crisis of the Early Nineteenth Century, 1820-1861

The Union in Peril - . events leading to the american civil war . north vs. south . the north and the south had developed

The Union in Peril - . slavery divides the nation. north and south enter a long and destructive civil war that ends

Chapter 4 - . the union in peril. section 1. the d i visive p olitics of slavery. difference between north and south.

The Peril and Promise of the Internet Within Mormonism - . john dehlin. 10 things i learned this year on the mormon

Act Of Union - . act of union. by: anika, christina, brian. a hope for government. durham recommended this union in 1839

THE UNION IN PERIL: CAUSES OF THE CIVIL WAR CHAPTER 10 - . section 4 slavery and secession why did the south secede?. who