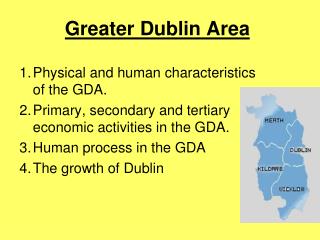 Greater Dublin Area. Physical and human characteristics of the GDA. Primary, secondary and tertiary economic activities in the GDA. Human process in the GDA The growth of Dublin. Route Focus/Nodal point. International airport and two ports. CSBG RFA Greater Stamford catchment area - . how to respond to csbg_rfa_81114 webinar presented by the department of

Greater Manchester Low Carbon Economic Area - . that by 2015 greater manchester has established itself as a world leading

Realtor In Greater Toronto Area, Marijan Koturic - "marijan koturic" is one of the best real estate agent in

Dublin - . by adam. the location. the location of dublin is in the east it is in leinster. the principal towns in dublin